In 1700 the iron industry was in a downward trajectory. Ironworkers required charcoal to smelt the iron ore or known in the 18th century as ‘ironstone’ in their furnace. Charcoal however was in short supply as the wood required to make charcoal was expensive. This posed an industrial problem.

In the course of a century however on critical and substantial change occurred as coal (or coke made from coal by much the same process as charcoal is made from wood) replaced charcoal as the fuel used in the smelting process.  This process is what typically separated iron from ironstone.

The above discovery happened within the eighteenth century and was down to three generations of one family. The Darby family solved this problem. 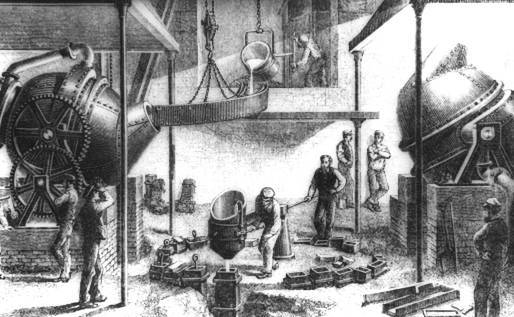 Abraham Darby approximately in 1709 was the first of three generations within his family to become an ironmaster. Having initially worked with brass Abraham decided to relocate to Coalbrookdale in Shropshire where he bought a semi-derelict blast furnace. This was where he successfully used coke instead of charcoal to fuel the furnace.

The success of Coalbrookdale and the business of Darby meant he was able to open a second blast furnace in 1715. This progress and enhancement of his business would have been progressed even further but for his death within 1717.

He was succeeded by his son Abraham Darby II (1711-1763) who took his fathers work to the next level when he found out how to make better coke by burning coal in ovens. This coke made the quality of iron better and with the two furnaces within Coalbrookdale business continued to boom.

Abraham Darby II died in 1763 taking with him a superior reputation for his gift of combining managerial skills with technological innovation. Following his death, Abraham Darby’s operations were continued by his son Abraham Darby III who is renound now for his creation of the iron bridge which was the first of it’s kind in the world. This was constructed above the River Severn using iron from the furnace made famous by his late Grandfather.

Steel was a stronger and less brittle than iron but difficult to make. This process was made far simpler in 1856 when Henry Bessemer invented the converted. This helped the process and turned molten iron into steel in 20 minutes. The advancements in steel and iron made industry flourish and the exploits of the Darby family are to thank for this.